Doors, both interior and exterior, come in all (odd) shapes and sizes. This week we’ve decided to show you the 3 largest in the world! The doors on our list are tremendous and we really did learn something new while researching the topic. In this line of thought, we hope that you’ll find the present post entertaining and educational at the same time.

The Vehicle Assembly Building or “VAB” for short is the largest building in Kennedy Space Center, part of NASA’s infrastructure. By its size, the Vehicle/Vertical Assembly Building is just monstrous. It was built in 1965 and at the time, it was the largest by volume building in the world. Today, more than 5 decades later, the VAB is still among the 5 largest by volume! Another world record that the VAB holds is for highest one-story building. It is also the place where the tallest, heaviest, and most powerful rocket to be ever launched – Saturn V, was built. But let’s get down to business.

As you may have already guessed, the VAB is famous for something else as well. It is the home of the largest doors ever made! There are 4 of them with each measuring at 456 feet or 139 meters. Each door is made of 4 horizontal and 7 vertical panels. In contrast to these massive doors, the tallest building in Bulgaria stands at just 126 meters. That is 13 meters short of the height of the VAB doors. An interesting fact about these doors is that it takes a full 45 minutes for them to open or close entirely!

The door of the Vehicle Assembly Building of the Tanegashima Space Center hold the Guiness world record for largest sliding door. Each wing of the door measures at a height of 67.5 meters, width of 27 meters, and thickness of 2.5 meters. Each panel weighs 400 tons which is truly unbelievable. Besides its colossal dimensions, the engineers’ approach to designing and constructing the doors is also fascinating. The sliding door was built specifically to accommodate the H-II A rocket and was inspired by traditional Japanese architecture, more specifically, the fusuma and shoji. At first, the idea looks pretty simple, however, the dimensions and weight of the whole construction complicate the project. For this reason, the engineers working on the project planned for different scenarios right from the start.

And why a sliding door? At first, three different designs were considered – sliding door, suspended-type door, and swing-type door. According to engineers, each of the designs was possible. The suspended- and swing-type doors, however, had some shortcomings which the sliding door did not. For instance, the weight in a suspended-type construction is problematic. The manufacturers decreasing the weight of each door wing but that came at the price of strength. The swing-type door solved the weight issue, but in turn required a more complex open/close mechanism. Another issue to be reckoned with was the fact that both types of doors were vulnerable to typhoons, which are common in Tanegashima. After careful consideration Kawasaki – the manufacturer of the door, decided to go for the sliding door.

#3 The US Bank Stadium glass doors.

In 2016 the most expensive stadium in the world – US Bank Stadium, home of the Minnesota Vikings, officially opened. The value of the facility is a bit more than a billion – 1,061 billion US dollars, making it the first stadium in the world that exceeds a billion. Тhe interesting part, however, is the construction itself. Right from the start, it was the roof of the facility that captured the public’ and media’s interest. It has an area of 22,296 square meters and is transparent! 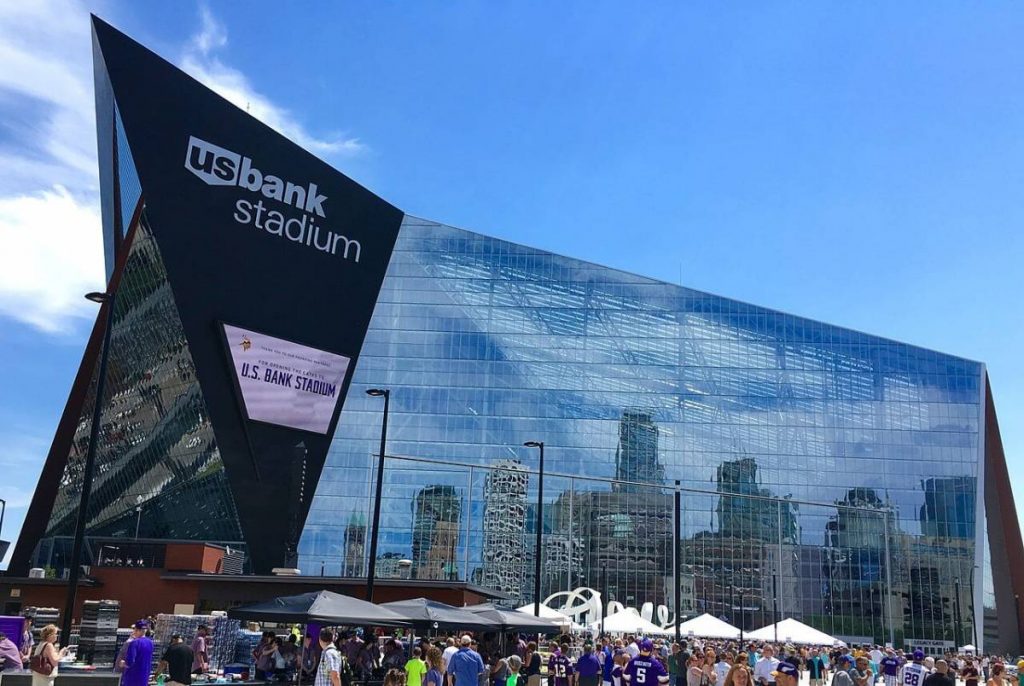 The 5 glass doors of the stadium, which are without exaggeration truly spectacular, remain away from the spotlight. The architecture firm HKS, responsible for the project, aim to let as much natural light in the facility as possible. Thus, the doors are made of glass and are in sync with the transparent roof. Being inside the stadium one gets the impression they are outside! The colossal doors rotate via an axis in the middle of each door. Each of the five glass doors is 55 feet or close to 17 meters wide and their height varies from 75 do 95 feet (23 to 29 meters). The glass surface of the doors is 2,787 square meters and the entire construction weighs 40,000 tonnes.

The idea of designing and building such doors hides many risks. The massive building is affected by variation in temperature, moisture and the likes. This means the stadium actually grows larger/smaller, depending on the weather conditions. You can now see why having glass doors is problematic. They have to be manufactured and mounted very precisely so that the doors can open and close without anything breaking. Thus, it wouldn’t be an overstatement to say that these five glass doors are a real feat of engineering.

You can find more interesting and useful articles such as this one on our official blog.